LAND and LIBERTY - WALES LAND ACT - A CALL TO ACTION! 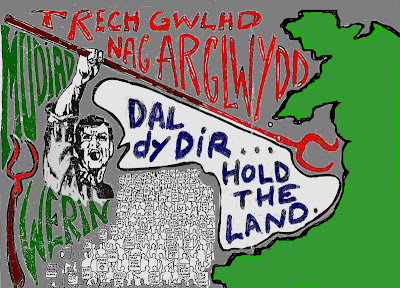 A 16th Century View Of The Land Grabbing Lords of the Land.

'Being oppressive and detestable;
scorning God and his commanments;
harrassing the weak for his land and welfare,
and behaving with abundant arrogance'.

Sion Brwynog who in 1597 wrote in reference to the
Forest of Snowdon Controversy:

(Adopted by Keir Hardie in his Aberdare/Merthyr 1900 Election Campaign.)

The Small Holders and landless Peasantry of Cwmwd Caeo made this their call in resistance to Gentry enclosues of their Common Land. the same Cwmwd Caeo where Gruffydd ap Rhys and his Young Wife Princes Gwenllian ferch Gruffydd ap Cynan with a small band of followers made their hide out from which to launch the great War of 1136 against then 'Anglo - Norman Robber Barons - the 'Conquistadores' of older times. The same Cwmwd Caeo of Llywelyn ap Gruffydd Fychan and sons who fought for freedom with Owain Glyndwr, Llywelyn being brutally executed in Llandovery Market Square for refusing to inform to the English King, the whereabouts of his sons. Let their sacrifices in struggles for Land and Liberty inspire us to continue the struggles of they and later generations of ‘People of the Pitcfork’ who fought against enclosures and later those farmers and Small Holders who fought in the great Tithe Wars 1886 – 88 for their Land Rights free of Economic Robbery by the Anglican Church of Anglo – Norman Conquest and Tudor Protestant Reformation.

Before these times, there was the  age of the medival Anglo – Norman Robber Barons war of conquest and Colonisation complete with ethnic cleansing and with it creation of an ‘Apartheid’ system of ‘Englishry’ and ‘Welshry’, created as a weapon of Social – Economic colonialism which made it possible for the ‘Conquistadoes’ and the settlers that came with them from England, Flanders and else where to seize  the best of our land whilst forcing the native Cymry into the margins of marsh and heathland of uplands as Mynydd y Betws  and Mynydd y Gwair as but two examples of many and much of our land still held by English Aristocrats as much made Possible by the Tudors who as example seized it to give to along with Mynydd y Gwair and many other parts of our land to their English Aristocrat favourites, many of whom still posses it as the Duke of Beaufort on Mynydd y Gwair. Ironically, it was Oliver Cromwell who delived it back to the Welsh but Charles II deliverd it back to  the English Lords and thence in part in recent times bought by Mynydd y Betws ‘Commoners’. In recent times along with other Common land that has been enclosed by the ‘New Conquistadores’ over running our land – the 'Windmill Masters' - Renewables Robber Barons. 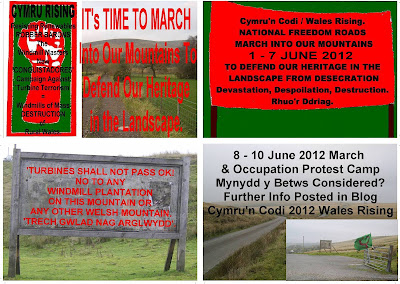 Other than the ‘Old’ English Robber Barons, there is of course the English Crown itself who following the Conquest of 1282 – 84 made the greatest land grab of all – ‘Our Country’ , Completed by the Tudors in their 1536 Act of Annexation. Much of it is still in their hands in form of Crown Estates as recent one possessed being Swansea ‘Liberty’ Retail Park and of course the older English Crown Estates all over Cymru as at Mynyddoedd Neuadd Goch, Llys Dymper. Llanllwni and Llanfihangly Rhos-y-Corn . Where else, maybe part of historic Cefn Du ? Whatever, the English Crown aside there of course also the pressing matter of the Vyrnwy Estate and great sell off by Severn Trent to ? we have yet to be told for sure which makes of this unfinished business to be taken care orf this Mis Medi 2012 again by TARIAN GLYNDWR or mybe 'STRIVELAND CYMRU'. What else needs to concern us? 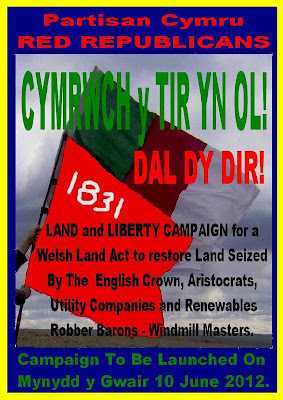 We recently attempted to luanch a petition for a Wales Land Act via WAG and found we could not and was given a verity of reasons so the reallity is we have a ‘Sham Senedd’ and so called devolved powers but we still do not own our own land or have powers over it. To this I can only say for all those who now cry for Independence to my mind this is meaningless and can only be real if we struggle for Land and Liberty and the first steps in that direction will be in as many Patriots and Welsh People far and wide signing the Wales Land Act Petition:

Support a Land Act For Wales Petition
25 Apr 2012 ... Following the complete occupation of Wales by the Anglo Normans in 1282 - 4
and again, in the 1420's following the War of Independence led ...
www.gopetition.com/petitions/land-act-for-wales.html - 19k - Similar pages

That’s the easy bit as the next step gets tougher, if we not make struggle to reposses our land and put it in ownership of our people via native peoples; farmers, small holders and workers via means of long standing tradional rights and thence via community democracy and control. Then Independence and Freedom are meaningless words as are calling for a Welsh Republic, what a ‘Rainbow Republic’ of dreams and not any radical Reality born of a resurgent people seeking to readdress centuries of wrongs and finnish some unfinnished business. Such struggle will be launched ‘Jubille Jamboree’ week I – 7 June 2012 with the March Into The Mountains Initiative in association with an across Cymru poster protest campaign on the aforementioned English Crown Estates and conclude with the occupation of Mynydd y Betws – ‘Stryveland’ on 9th June 2012 also on 10th June 2012 the promotional pre launch of the Cymru y Tir Yn Ol ‘Land and Liberty sponsored ‘Land and Liberty’ ADFEDDIANT  – Wales Land act Campaign. Noting that the official Launch will be at a conference in Maenclochog on 14 July 2012 and during evening of the same day at evening time there will be a Land and Liberty – Wales Land Act Rally at the Waldo memorial for reasons of successful Resistance to land Grabbing of Preseli Mountains.

'He kept the Preslau from the Beast'.

Below couplet, written to remind of Rhyfel y Sais Bach 1826 and of Siaci Ifan y Gof,
sounding his horn in a call to action of the time on Mynydd Bach: 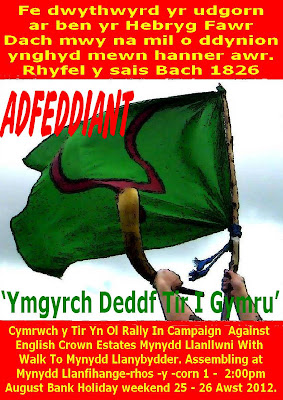 Posted by WELSH REMEMBRANCERS at 02:29